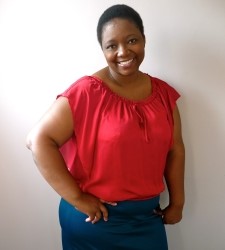 Nontobeko Mpungose “Beko”: Child Protection Officer
What is a ‘typical’ day in your working life? Going to the community where I mostly do trainings and child protection awareness’s. I interact with individuals and caregivers in the community and I get to understand their everyday life and struggles. I also get to understand why they behave the way they do towards their children sometimes, and I find that a lot of it has to do with the way they were brought up, and sometimes when they get stuck and they don’t know what to do, they revert to the way that they were raised. What they’re doing, such as beating their children sometimes, is not really what they want to do, but they do it out of frustration. What I love about this is that you get to interact with them, there is a little bit of change that seems to happen in the interactions and then people go away from the training saying they want to try a new way of disciplining their children.

I train on child protection, but actually it feels like the focus is parenting because people confess that they beat their children out of frustration, and they want that to change. It is important to talk about what is happening in their own homes first, before talking about child protection in the wider community! The goal is for children not to be abused in their own homes. Everything is a process. A learning process.
What has been a memorable moment in your work in the past month? When we were doing the child participation event, what struck me was the fact that children were able to stand up and talk about their own feelings about abuse. They were able to be vulnerable in front of their parents and other adults. It made me realise the child participation process is very empowering for children. Children are being listened to, they are being heard.
What is one challenge you have had to contend with in this role? People want to report abuse, but they don’t want to get involved. Once you start following it up, they say things like: “No, it’s been sorted” or “No, I got the story incorrect.”

Once a lady in the community reported suspected abuse of her relative’s child. She was very worried about the child. I asked her for her relative’s phone number so that I could follow up. She agreed, but the next day she phoned me and told me not to worry, apparently the story is not true, there is no abuse.
People share stories, but they don’t want the follow up. There is a lot of fear.
Please share a story from the field… When I was running a Child Protection training, there was one participant who was about my age. She appeared so angry. She shared about how her daughter was approached by a much older man who told her that he loved her. Her reaction to this appeared to be harsh, an extremely angry reaction that didn’t seem justified by the behaviour. It turned out that she had married very young when an older man said that he loved her, and she ended up in an abusive marriage. She does not want the same thing to happen to her child. People so often react because of the pain they have been through themselves, and we need to see and understand the deep pain where people are coming from.
What motivated you to go into community work? I’ve always wanted to work with orphans growing up. When I lost my mother (as an adolescent), I realised how much people go through. There’s a lot that happens, there are a lot of changes and there are a lot of expectations of the people you’re living with, and expectations from the community. There were a lot of decisions I had to make myself.
And what keeps you going? Knowing that I have made a contribution in someone’s life. Sometimes you do feel helpless in certain situations, but you also know you’re making a difference every single day. They go home changed people, even though change is a process – in the long run there will be change. If I train 30 people, I know that about 3 of those people will implement what I’ve trained them on and that will make a difference in a child’s life.
What three words describe you when you’re not at work? Happy, loving, and caring.