What Our Partners Say: Uthando Dolls 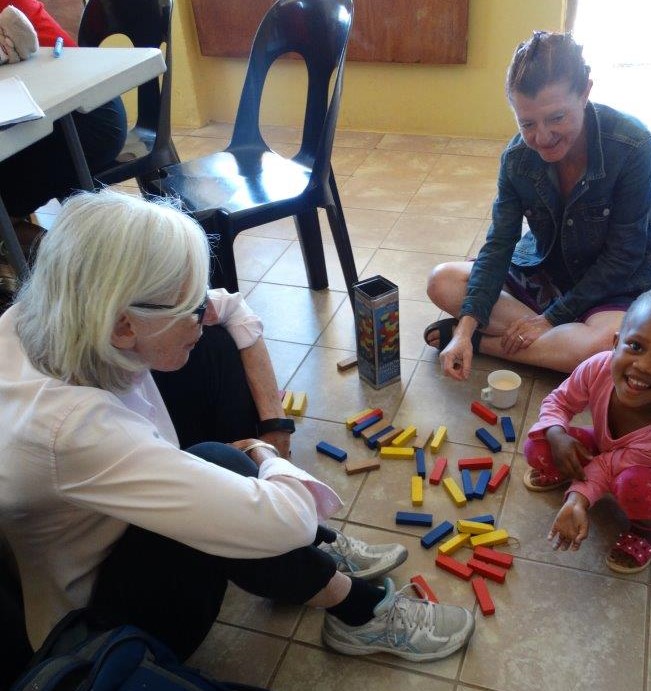 Peter and I recently caught up with Rachel, Robyn and some of the dlalanathi team on a visit to South Africa. We were welcomed with warm affection. It was Peter’s first visit, and a joy for me to be with the dlalanathi team again.
The team had organised a busy three-day program to introduce Peter to their work, and to share with me some of the developments since my last visit. Robyn, Peter and I set off with Beko (Social Worker and Child Protection Officer) to meet with a group of women from the Mpumuza community who had participated in a Family Support Process and their Child Protection Training.
Mpumuza is a peri-urban community “just over the hill” from a wealthy white suburb where we were staying. Once over the hill and very soon after the turn-off from the main road the tarmac surface gives way to a potholed and rugged track. Not many cars travel on these tracks, they mostly serve as walking paths for many of the community who walk over the hill to supply domestic labour to the homes on the other side.
There are very few community buildings in Mpumuza. To engage and work with this community, dlalanathi have had to rely on community members to open their homes for meetings and groups to take place. The Steven Lewis Foundation have just awarded dlalanathi a generous grant to work with the Mpumuza community to build a safe play park to serve children and families, the first of its kind in this community.
We were welcomed into MaMabongi’s home, one of the few homes in this community with a gate and secure fence. The neat and solid home is set in a well-watered patch of green lawn with three almond trees with ripening fruit at the property’s edge. The humble living room has electric lights and a large comfortable brown velveteen covered sofa. The weather was foul – cold, windy and wet but we were dry and warm in the comfort and care of Mabongi’s home.
Mabongi, Mathato, Fikile and Mathusi were waiting to welcome us and talk about their experiences and their hopes for the children in their community. Siyabonga*, a five-year old boy, was also with us. Mabongi was that day taking care of Siyabonga, the son of one of her neighbours. Siyabonga mother works and his usual carer had gone to a funeral.
When we arrived Siyabonga was being carried on Mabongi’s back. Although he does not look to be five, it was clear he is a big boy, and too old for such carriage. He sat on Mabongi’s knee for the first part of the conversation. He did not seek to explore but reached out for Mabongi’s cell ‘phone, not to engage with the ‘phone but to run the hard edge of the ‘phone along his gum, which he did repeatedly for some time. His eyes did not fix well. He has a slight astigmatism and a slow trail of dribble flowed from his mouth. When he was seated on the floor he was able to support himself to sit, but his mobility was otherwise limited.
As he sat Siyabonga repeatedly bent his head back and forward in a rhythmic way until his eyes began to close and he was taken to lie on Mabongi’s bed. Siyabonga was silent throughout the visit, and clearly found comfort from being close to Mabongi. He looked briefly at Peter when he was smiled at and had a briefly glanced at me when I sat on the floor with him.
When I asked what were their hopes for Siyabonga and other children like him in the community Fikile said she hoped that one day he would be able to walk and would learn to talk. She also hoped that they would be able to find a wheelchair for him.
Mabongi told us that she has been concerned about Siyabonga for some time. It seemed that her recent Child Protection training encouraged her to be more proactive in her concern. Although his mother said she had been taking him to the hospital for his treatment, Mabongi thought his development did not show evidence of any or much intervention. She asked permission to take him to the hospital to learn from the doctors how they understood his problems and what the community might do to help him. She learned that although Siyabonga’s health card has been scanned regularly at the hospital – so he did indeed go to the hospital with someone – he had not been seen by any of the staff since he was one, in 2013! It seemed that his card was being scanned in order to secure his disability grant but no time was given to see the doctors.
Mabongi still does not understand the mother’s neglect or reluctance for her son to participate in active treatment, however, she has Siyabonga’s mother’s agreement that she can take him to the hospital for his physiotherapy and other interventions. Mabongi is committed to doing what she can do to ensure that Siyabonga gets the help and support he needs to make what developmental gains are possible.
These women talked about their hopes for the children in their community – that children would feel safe, that they would learn right from wrong, and that they would be able to find their voice to speak with others about what troubles them. They also want children to have a voice to say “no” to adults who ask, demand or expect them to participate or engage in inappropriate ways that worry or upset them and to identify the adults in the community who are safe and trustworthy and who will support them.
*Name changed to protect identity.