In the field: Children in Mpumuza find a voice

At the beginning of 2017, Beko Mpungose, our Child Protection Officer completed training with a group of community members from Mpumuza where dlalanathi are currently working. After the training, 5 women came to Beko and expressed their desire to work directly with children, and specifically to hear children’s views on child safety and protection in their own community. We at dlalanathi were thrilled and delighted to hear these women’s enthusiasm to facilitate child participation in the community as this is the very outcome we desire to see for children! This contributes to the increase of safe spaces and relationships for children in communities, and communicates to children that they are indeed important and their voices need to be heard.
Beko set about working directly with these 5 women named; Bongekile (Mabongi), Mathato, Ntombifikile, Doreen, Zamekile to train and mentor them in running a child participation process. The process used was based on the Child-to-Child* 6 step tool. The women were trained in each step of the process and mentored weekly as they implemented it with the children. We catered for 20 children and 36 showed up! The sessions were held at Mabongi’s house, she has a big heart and a large garden! The facilitators were gracious and flexible and accommodated all 36 children. As the participation process unfolded, the children chose to focus on child abductions, an issue which has been highlighted in the press in South Africa over recent years (linked to child trafficking), and has been a real issue faced in Mpumuza this past year. The children researched and discussed this topic and decided that they wanted to create a drama to perform for their parents and other community members in order to increase awareness of the issue and to communicate the support they need to feel safe.
Once the participation process was complete, the children continued to arrive at Mabongi’s house on Saturdays, week after week. It was clear that her house had become a fun, safe place for the children to play and so, Mabongi and the other facilitators decided to continue to build and develop their relationships with the children and a “Play Days” club started at the house. Play Days are a great alterative to safe play in communities where often there are no parks or safe, adult supervised spaces for children to play in.
In addition to the start of this Play Day, the facilitators had a waiting list of 18 children also wanting to be part of a participation process! They started another participation process concurrent to the Play Days and thus had very busy Saturdays from then on! This second group of children participating in the process decided that they wanted to deal with the issue of sexual abuse and also parents not giving children food**. After this process ended, the facilitators noticed some changes in some of the children, especially an increase in confidence in those who were more reserved and shy at the beginning of the process.
The grand finale of the year was an event in the community to which the children from both participation groups invited their caregivers to come and listen to what they had achieved and watch the presentations they had created. This was well attended and enjoyed by the caregivers. Beko had the opportunity to speak one-on-one with a number of caregivers to find out from them what impact they felt the process had on their children. The comments were positive. As Beko notes: “One caregiver said her child enjoys going to school now and her marks have improved.” “The parents see the programme as something that assists their children in not spending too much time on the street.”
We celebrate Bongekile, Mathatho, Ntombifikile, Doreen and Zamekile who gave a lot of their time and care to the children of Mpumuza in 2017 and continue to do so in 2018. They report to becoming much closer as a group of women and provide a significant and joyful community of support for one another. They are true champions of children!
*Child-to-Child is an international child right’s agency specifically focused on ensuring the voice of the child is heard in all matters pertaining to them. www.childtochild.org.uk
**Children are monitored and assessed as to their well-being and any concerns about neglect and/or abuse are followed up and referred to local social workers for assistance. 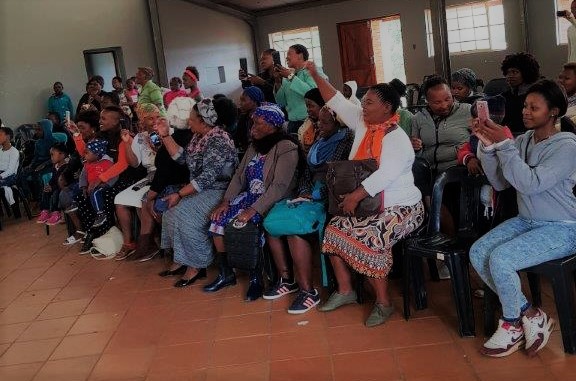 Parents celebrate their children’s voices at the end of the year.